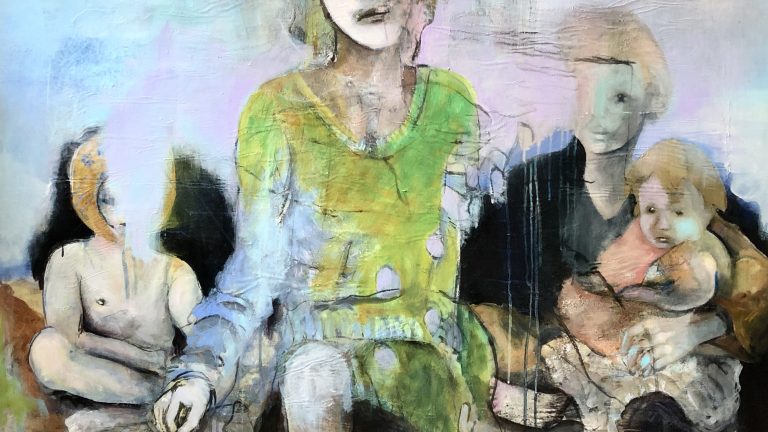 Art, Article, Culture, Design, Paintings, Paintings 2021
Luxury Splash Of ArtDecember 2, 2021December 3, 2021
Gimme Shelter, the Rolling Stones clamored, realizing escape and refuge were illusions amid life’s swirling unpredictability and cruelties. Where was hope, a safe retreat from the turbulence of their strife-torn era? The Stones were certainly messengers. But their impassioned plea for Home, a safe haven for the “soulless, loneliness and isolation” of lost innocence knows no time limits. Shelter, pursuing relief from the hurts, real and imagined during childhood, is an eternal quest. There are no “gimmies,” quick discoveries. We struggle to plant roots, to find our Identity. That universal pursuit, turning fragmented parts into a vibrant, ever-creative whole animates Thea Vos’ “whimsies.” A philosophical fantasist eager to play with her sprites and spirits, Vos leads us into a Jorge Luis Borges world of mysteries, speculations, and autobiographical soul-searching. 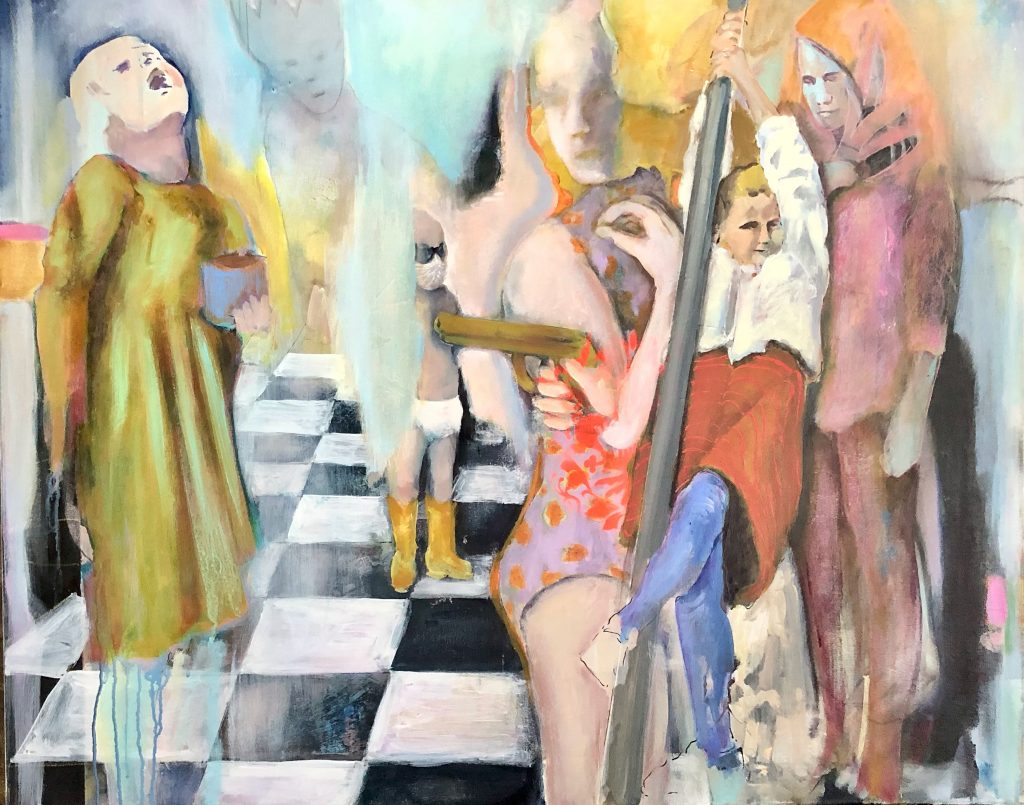 An amusing, revelatory–and disturbing–romp, featuring faceless, deformed human figures, mixed with a coterie of ghosts, assorted photos, images and impressions are transformed into paintings that portray Vos’ plunging into the looking glass. Quixotic and chaotic, her stunning work confounds and surprises–we are always left to ask questions, to ponder meanings.
Peering at her canvases with blurry forms, rich colors, different horizons, silences, and contrasts, Vos exudes, “I work on several ideas, concepts at once. My mind is whirling, boing, boing, like a pinball machine. I have a lot to express. “I get blocked at times, maybe I am bored, some of my figures repeat themselves. But I move on, I have bursts, explosions. Things, feelings, are always bubbling up, and I release them.” 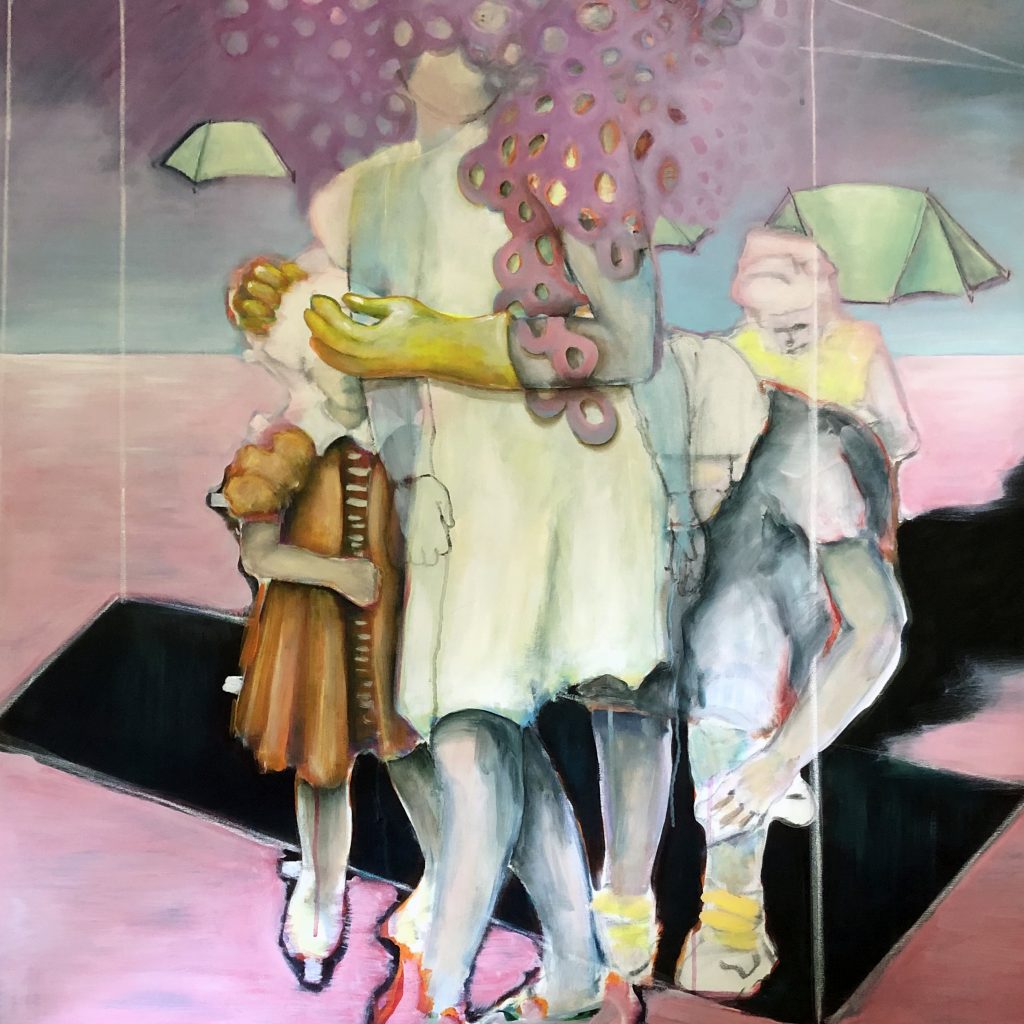 Unspooling psychological puzzles with enigmatic pictures-within-pictures, Dutch native Vos dares to return Home. Professing faith in the cosmos and quantum physics, she feels “it’s special to remember things, to try to make sense of her (amorphous) mother (typically wearing bright yellow latex gloves). “She was always so removed, so silent. Still the manipulator… I must connect with her to understand.”In No Shelter, faceless ghosts, a mother cast as an unapproachable wraith, create an uneasiness, an unsettling turbulence. Vos is inspired by Francis Bacon and Marina Abramovic, their exploring the existential Edge–the macabre, agony, devotion and pessimism. In Bacon’s Studies of the Crucifixion, he’s oblique but still condemnatory (of Nazis). Vos is equally damning of childhood strictures (along with indifference faced) that led to uncertainty, loneliness, and her silence. 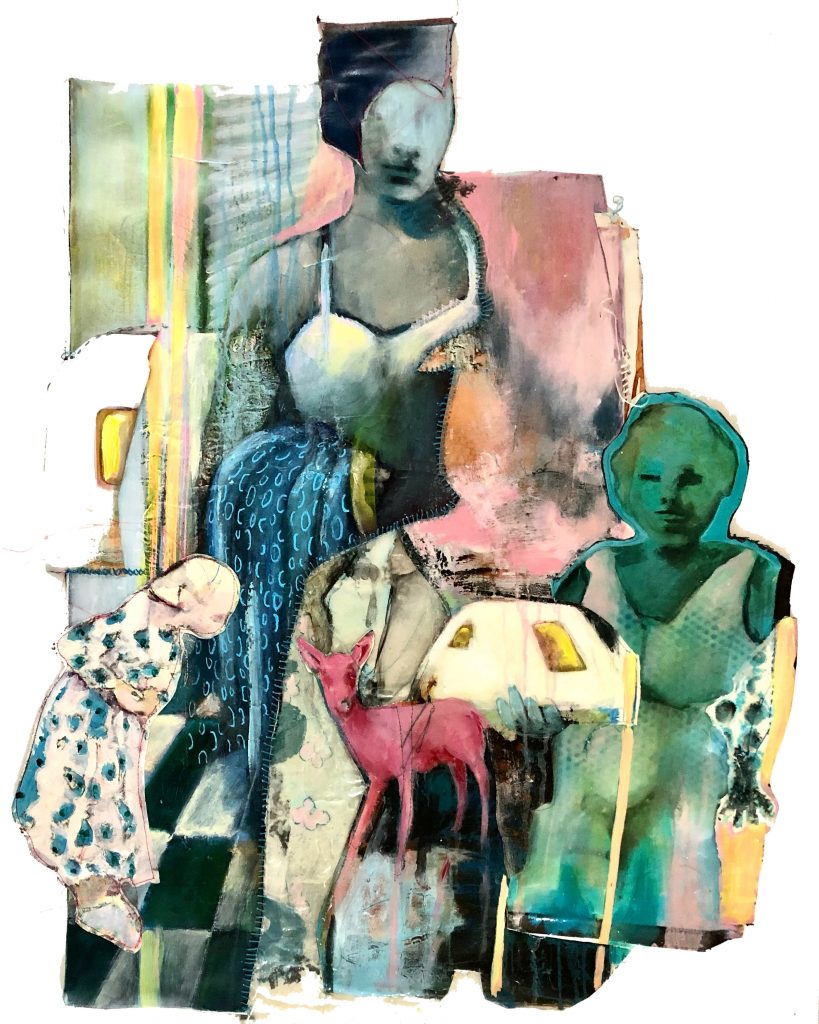 Standing near her dog Madz in a Wagneningen, Holland studio,  Vos insists, “ managed to endure the emotional deformities.” Even in her faceless figures she feels “there is a heart,” and to remove artifice, find reality, “debones” her subjects. Unpeeling layers is traumatic, overcoming fears in Homesick for the Missing Child (the search for Identity involves “looking for a clear heart, figures stepping out of history, pulling a girl in many directions, a crucifix and suppression). Thoughts “bubble up,” impulses run wild, and during this intuitive “digging,” collages are formed, “whimsies” emerge. Even if undefined, Mystery Me and Angry Ego chronicle Vos’ pilgrimage, her quest for solidity to end the Bergman-like “Through the Glass Darkly.”“In my mind now I am breaking free, I’m shy, but I don’t want to hide myself anymore,” says Vos, who’s increasingly appearing in exhibitions throughout Europe. 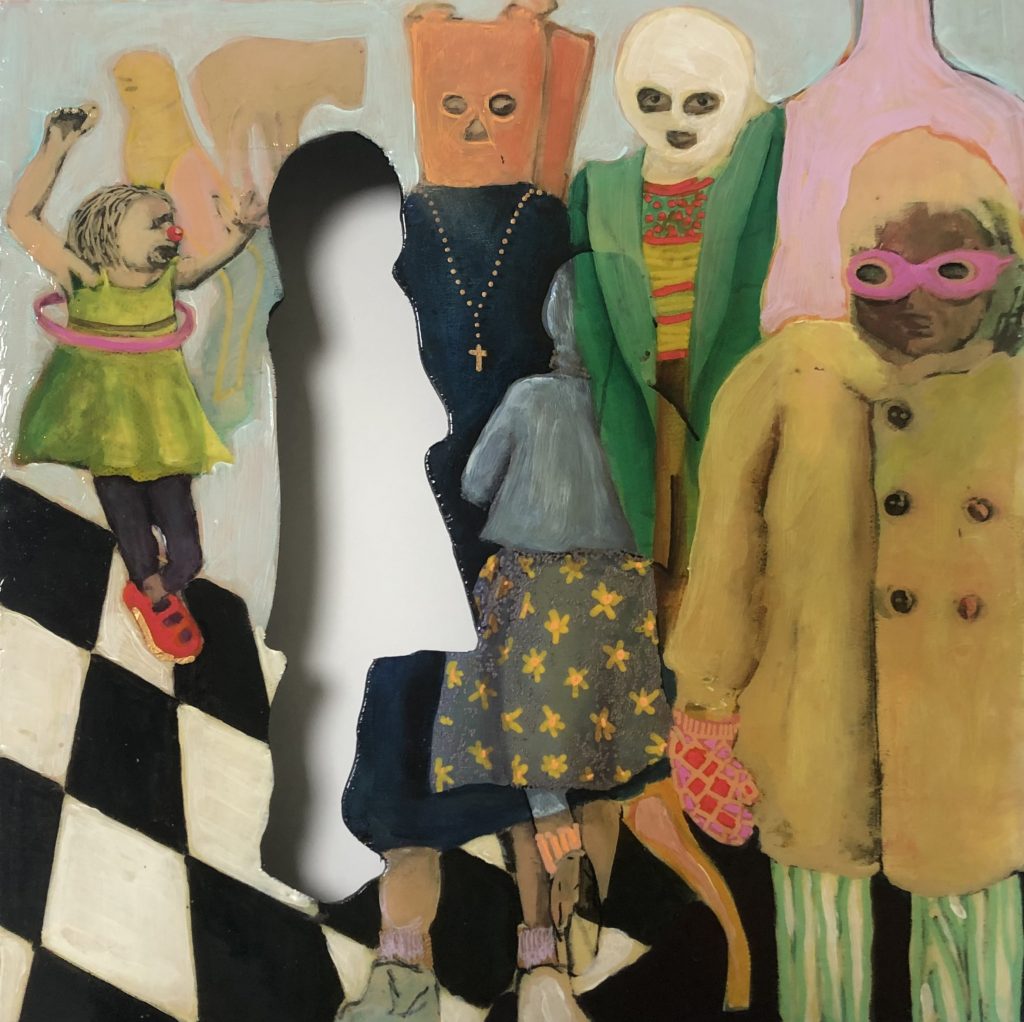 No longer bound by fears, she is giving full rein to a diffuse palette of fascinations–making sense of hide-n-seek, “game of life” chessboards, masked figures, a woman in white lace, and boats cast adrift. In So Many Faces, hybrid figures melt into each other, forms surrealistically mutate. Blurring disciplinary lines in numerous paintings (with Freud by her side), she pushes nagging self-doubts away. Vos is free in Play the Game With Me. Joyous, she’s the laughing counterpoise to the girl begging to be heard–the adolescent stubbornly trying to burst past her mother’s antiseptic indifference.“Freud would be proud (of me), I am coming out of the shadows,” insists Vos, standing next to a table covered with her Delft sculptures, deciding which pieces she will take to an exhibition in Gladbeck,   Germany. Daring to follow André  Breton’s “Omnipotence of Dreams” manifesto, Vos is embarked on an identifiable voyage. She’s confronting her past, squeezing it as if her collages are an obligation to herself, to expunging her “voiceless” isolation, and to soaring whimsically. 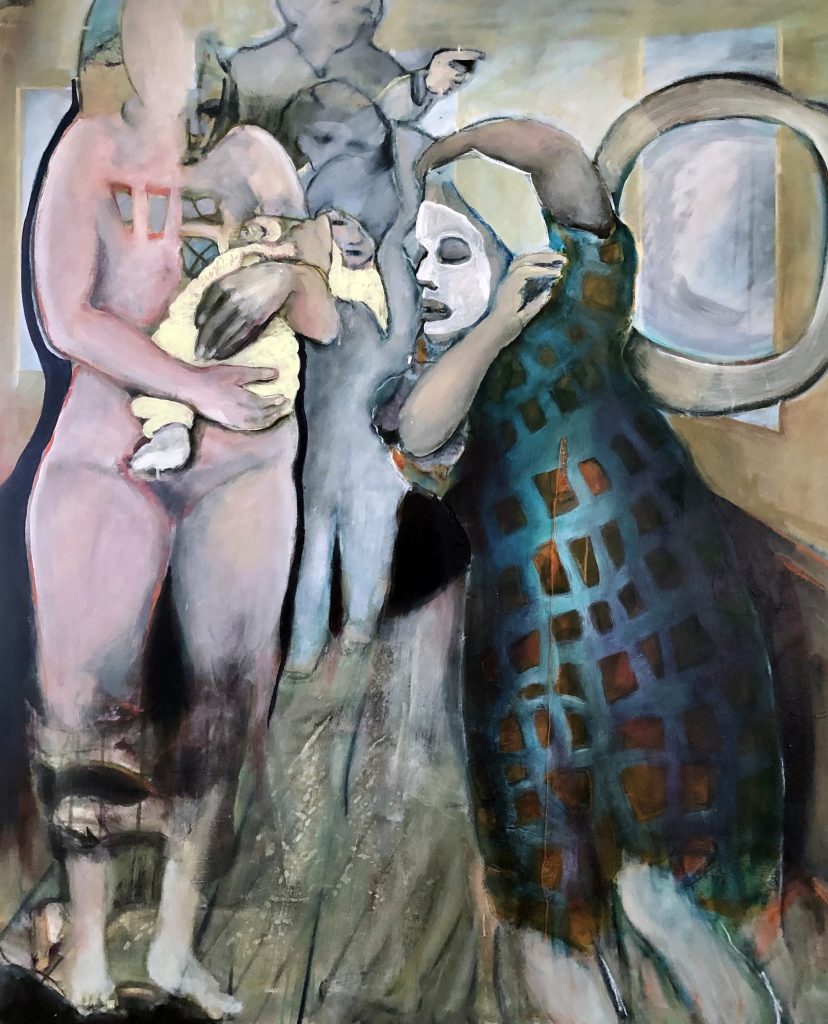 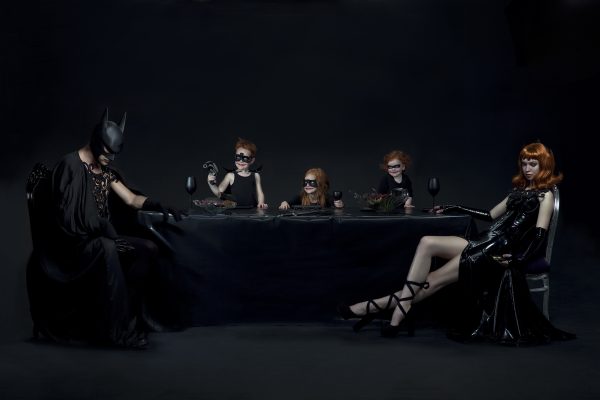 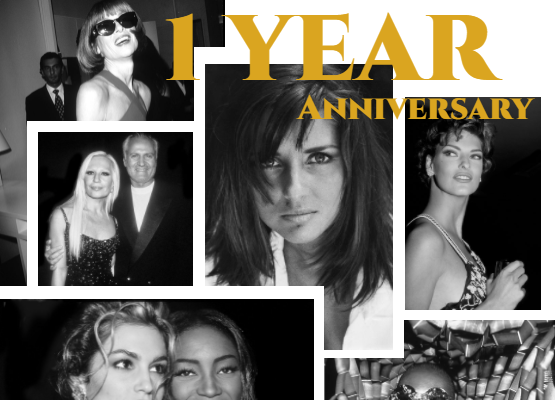 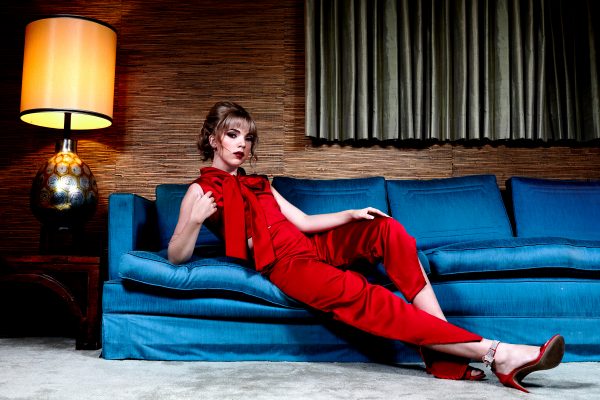 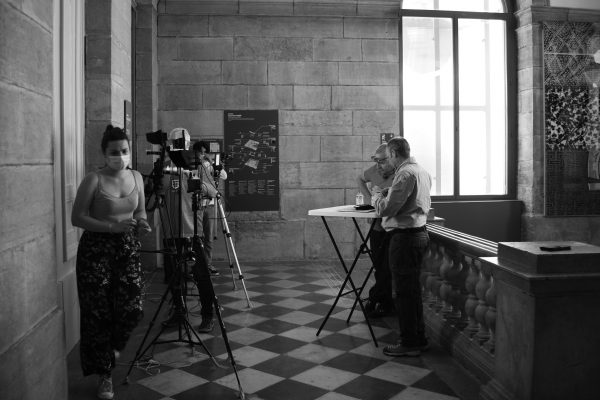