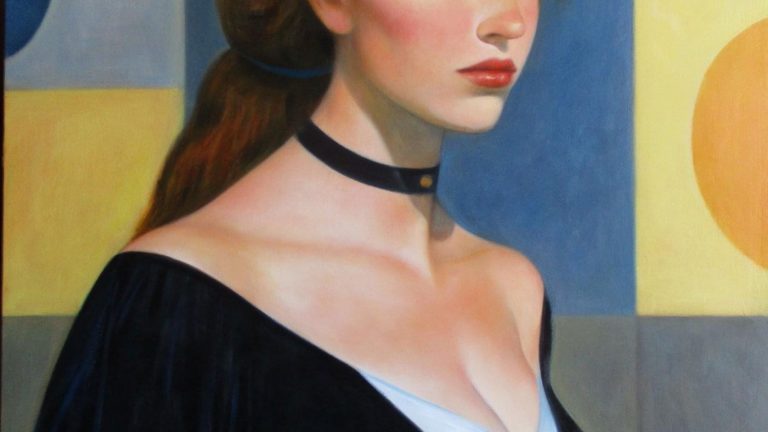 Woman is one of the most grateful themes in art. And the awareness of this fact is obvious as it is undeniable. So it was without reason that artist of all kinds succumbed to him at the turn of the century. In the centuries that followed, woman did just well. Filling the planes of paintings by many talented artist with its presence. Appearing in portraits, nudes, genre, mythological and biblical scenes. They were immortalized both those wanted to provide purely aesthetic values with their works, and those who wanted to provide more or less complex content related to the female side of the personality or the leitmotif in subsequent realizations. And here we can say that Paul Laurenzi is one of them. 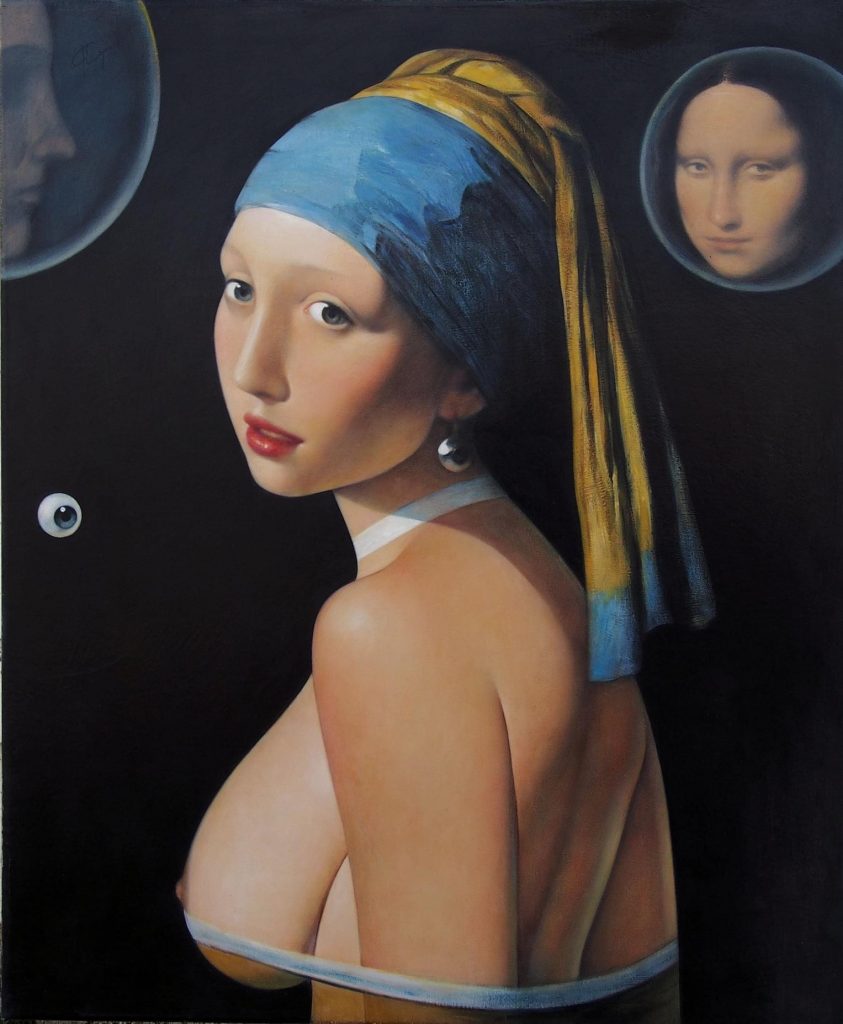 PL: Hello, my name is Paul Laurenzi, painter, I am 56 years old and live in the Oise (France).

LSA: Where do you work? What surrounds you in your workplace?

PL: I work from my home in the countryside. Nature surrounds me, something that I appreciate more and more, especially in these troubled times. This environment is conducive to inspiration and reflection.

LSA: How long have you been painting?

PL: I have always loved drawing since I was a child. I was 25 when I started painting professionally. My first exhibition took place in Marseille, in 1991. 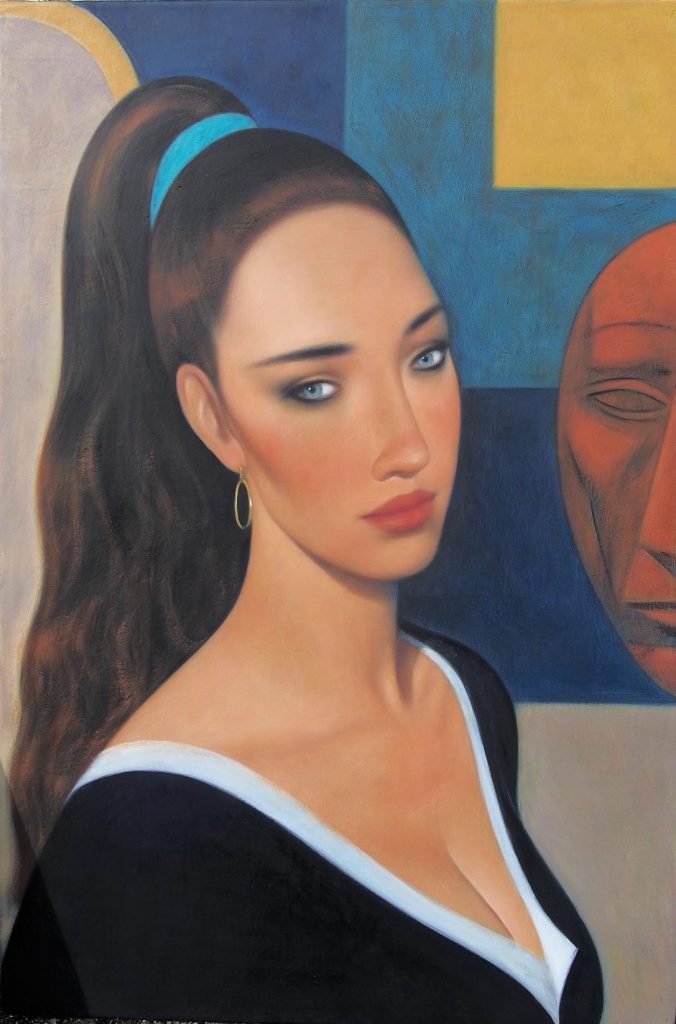 LSA: Why are you painting?

PL: Ah! Great question! I paint primarily for pleasure, and I consider the act of painting to be a language. It is therefore a vocation and making it my profession is a very old desire.

LSA: What are your sources of inspiration?

PL: As a teenager, I was a fan of comics, super heroes, the universe of heroic fantasy … in short, anything to do with the imagination. Then, as an autodidact, I was inspired by books on anatomy to discover and draw the human body, and I also consulted books dedicated to the great classics that I admired: among others, Lautrec, Rodin, Manet, then more late Balthus, and other Bacon.And when I exhibited for the first time in 1991 in a Marseille gallery, I presented paintings after female models … This exhibition was in the company of a renowned artist: Bernard Buffet.

LSA: Women are one of your main sources of inspiration. Are your paintings of women made from real models?

PL: I started by painting people from my close entourage and who willingly offered themselves: friends, but also sometimes companions. Now I work a lot from photos. The Internet is a large image bank … I let my inspiration browse through photos, anonymous models, well-known actresses, etc.

LSA: What mediums do you use?

PL: I use pencil, oil and acrylic and recently got back to drawing. It is not my favorite medium, because I find it limited by the means it offers. However, it is very accessible, fast and allows you to get to work immediately. He is excellent for working on his technique.I use acrylic to paint abstract.

LSA: You did your national service … why didn’t you have a military career?

PL: I spent my military service “willy-nilly” in a barracks in Nice. And although I wanted to become a “conscientious objector” (a very fleeting idea), I found that national service was not really such a bad experience … I especially remember good memories … I even painted for the colonel of the barracks!Then when I left the army, I had the choice to return to carpentry, where I had already spent two years as a skilled worker, but I refocused on my primary passion for painting. And I left the family home to settle in Vaucluse where I was looking for an activity close to my aspirations.An activity where there was more spicy, hence my interest in eroticism which was an opportunity for me to vary the pleasures.

LSA: Do you practice other arts?

PL : I take pictures. I like to photograph nature or in the city, extracts from surfaces, damaged, rusty, dilapidated, etc.

LSA : Do you have other passions?

PL: I am a cinema lover. It is a professional environment that I find fascinating. When I was young, I wanted to be a makeup artist or creator of latex monsters for horror movies!I am a big fan of French filmmakers such as Truffaut, Chabrol, Sautet, to name a few. But also across the Atlantic: Kubrick, Lynch… It must be a colossal undertaking to make a film, to manage a team… I loved those blessed times when cinema was not just about profitability… Most films Today seem to rely heavily on merchandising, which leaves little room for passion and inspiration. It feels like the producers haven’t realized that there is no “recipe” for making a “movie that works”. I take the example of the success of a work in painting: when I deal with a subject such as a seated woman putting on her garter belt, the painting always sells, but I cannot explain why.I also like all the “strange” subjects: the astonishing knowledge of ancient forgotten civilizations, the myth of Atlantis, UFOs …Song (French, Anglo-Saxon), classical music, poetry, sculpture can also inspire me and bring me great joy. And as I am passionate about ancient civilizations, Greco-Roman mythology, I had my period “Lascivious Venus Observed by a Faun” …

LSA: You mention Klimt, Henri de Toulouse-Lautrec, Balthus and Manet on your website. How did these artists influence you?

PL: I discovered all these artists in books, I feel close to them, as if there was a family relationship, a spiritual kinship. These are people I would have liked to know, I would have liked to speak with them. A certain power emerges from their works, as well as a certain eroticism.You can add to this list: Salvador Dalí. On the other hand, if I admire the work of the artist, in view of his interviews, I think that I would not have liked the character.It must be said that until the beginning of the 20th century, painting (along with sculpture) was practically the only way to reproduce various bodies or images (photography and cinema were still in their infancy). She was admired by many people. To paint a portrait for a family was a privilege. 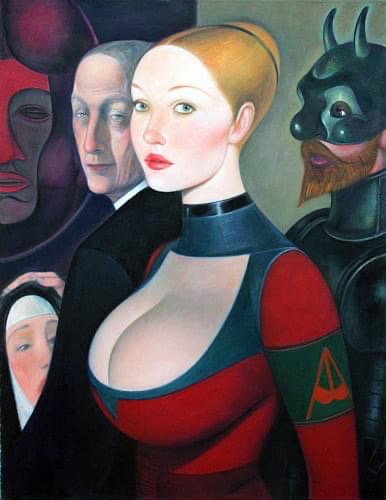 LSA: How has Beauty and the Beast impacted your work?

PL: I did not decide to specialize in the representation of a Beauty and a Beast, but it is a very strong source of inspiration. This representation of a terrifying masculinity and of a woman troubled by this masculinity. … It is this ambiguity that is interesting, and Jean Cocteau has portrayed it very well in his film.

LSA: What does Eros mean to you?

PL: Eros represents for me pure desire. It is important to be interested in eroticism without suppressing your emotions, without taboos. I like this psychological aspect. To work on the erotic, which is “daring”, is to represent it without worrying about the gaze of others. You shouldn’t be embarrassed about your own vision. Of course, I don’t like gratuitous provocation. Eroticism is an intimate domain, but I don’t want to expose my private life in painting. I keep my garden a secret, my representations now remain imaginary.In my work, “seeing without being seen” is also important. Thus, in my background, I recently replaced the fauna with an eye (more or less surrealist) and / or masked characters, like at the Venice carnival that I happened to represent during my first exhibition at “Les larmes d’Éros”. These “masks”, “eyes” or “totems” are ultimately only the representation of the artist himself who sees, observes his model, a bit like Pygmalion would do …

LSA: Let’s get to the heart of the matter: why does the female body inspire you?

PL: No doubt because I am a man, heterosexual and who loves the female body … I obviously love their intellect which is a source of inspiration! An artist friend once said that “I also paint the woman I want to be.” We all have a masculine and a feminine part in us. I most likely represent this feminine part that there is in me, through existing images.

LSA: Most of your paintings of women have big breasts, why?

LSA: If you had to keep just one of your works, which would it be?

PL: It is difficult to answer this question. A painting that attracts is love at first sight, it is indefinable. I have a few old paintings in mind, but it’s mostly the more recent ones that I would choose! Art is a way to discover oneself, to explore oneself and to transcribe one’s emotions to the public. The artistic past and intimate memories enrich the works.The period when I exhibited at “Les larmes d´Éros”, a small Parisian gallery now closed, was the period that marked me the most professionally. There, I met art and eroticism lovers with whom I was able to have very rich exchanges, and without taboos. In matters of love and eroticism, it is a question of exchange and freedom.

LSA: A little comment for each of these works?

Face: I went back to sketching during the first confinement (quarantine), because I could not return to my workshop (well, that’s what I thought). For this drawing, I was inspired by the face of Nathalie Portman (especially the look). I liked this “young woman with short hair” side, androgynous nature …

Dark side Jekill: In this painting, I was clearly inspired by Dr Jekill and Mr Hide. It’s a bit of a parody. The reader is wearing an outfit that shows off her attributes, and I exaggerated her breasts. Eroticism is contained with this character in full mutation. The fact of hiding eroticism underlines the ambivalence between prohibition and the desire for freedom.

Delicate scene (renamed “Bécassine fascine la médecine”): Inspiration of the 1920s. It is a humorous painting representing a Breton with a strong breast. I took over this painting by removing the German soldier and the puppet and, instead , I represented a doctor of the renaissance. Auscultating the young woman, he falls on her cleavage, hence his libidinous and surprised gaze. 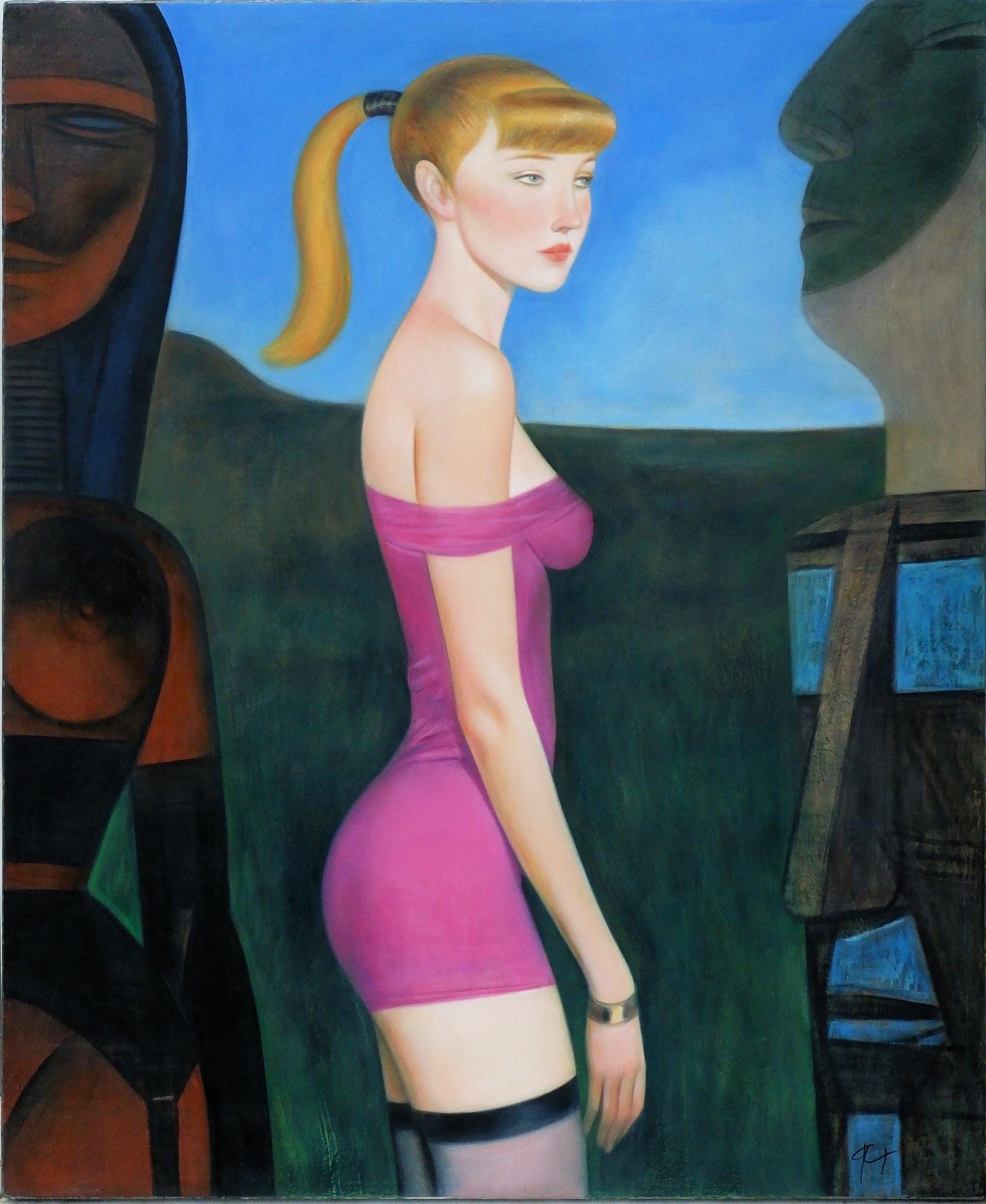 La prédatrice: Inspired by Dracula, I represent vampirism. A vampire is a seducer, a predator, like the narcissistic pervert. This is a woman, because I prefer to represent women. But I want to say that not all women are predators! (laughs)

Sensuel est ce rite: There is a nod to religion in this painting. A priest with an explicit gaze. A woman wearing a half-latex, half-tight costume, then a masked figure in the back of the painting. I represent a group of characters and the various feelings that bind them. The woman has a look that invites the viewer to join them.

It interests me to know the viewer’s interpretation. Everyone has their own unconscious. And during exhibitions, at the time of the opening, I like to interact with people, to know their personal vision of the work. By commenting on my paintings, people unwittingly deliver their unconscious, their own vision of art. 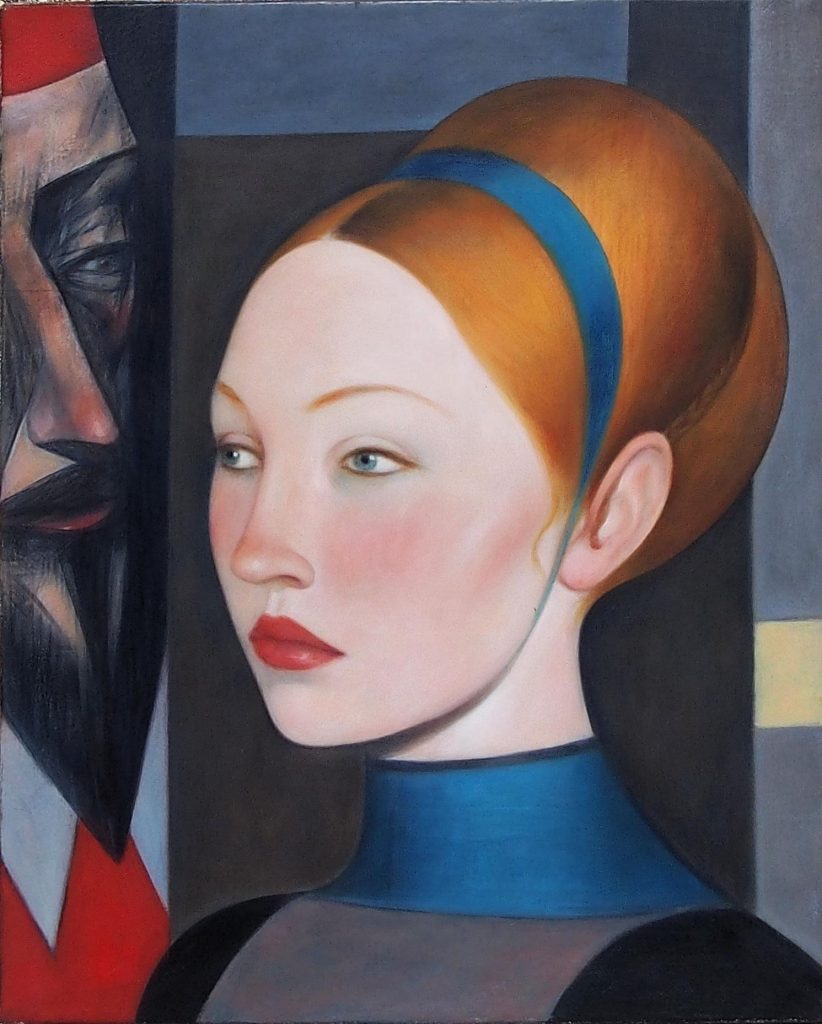 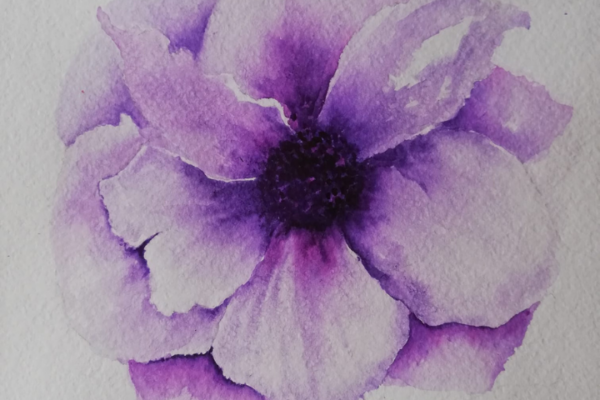 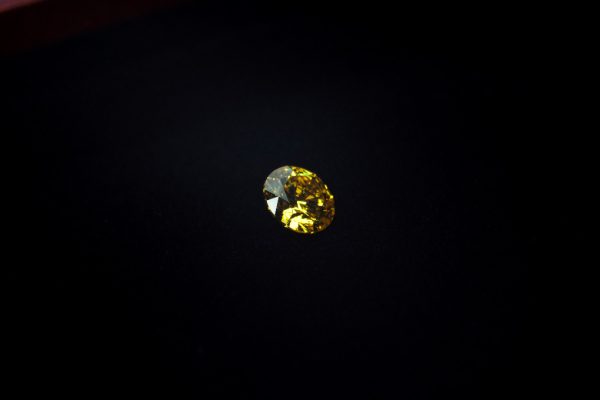 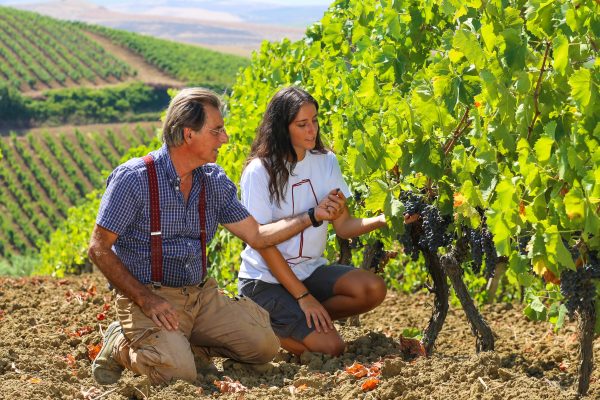 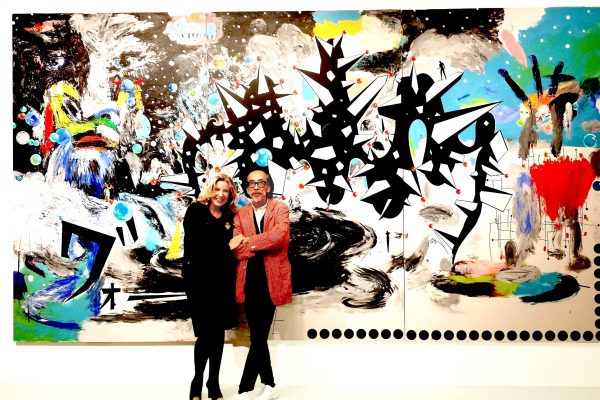